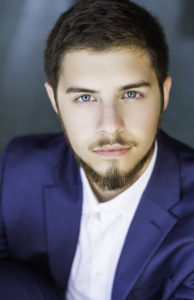 Bass-Baritone, Nate Mattingly is an emerging artist and native of the Dallas/Fort Worth area. In 2014 he made his professional opera debut as Colline in Opera on the James’ production of La Boheme, and was invited back to sing Don Bartolo in Le Nozze di Figaro in March of 2015. He also made his main-stage artist debut this past May as Horatio in Fort Worth Opera’s production of Hamlet and in their new works program, Frontiers. Since then, he attended the 100th anniversary season of the Seagle Music Colony where he sang Don Basilio in Il barbiere di Siviglia and Javert in Les Miserables. He earned his M.M. in Vocal Performance from the University of North Texas and currently resides in Brighton, MA, working towards his Graduate Professional Diploma in Opera at the Boston Conservatory.